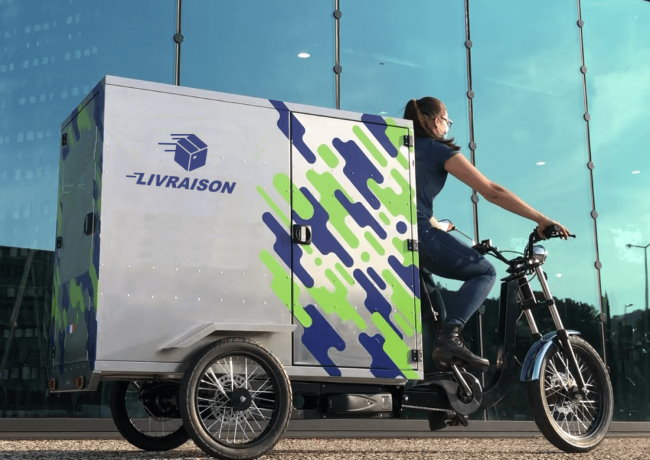 HISTORICALLY, THE CARGO BIKE FIRST APPEARED IN THE EARLY 20TH CENTURY. DERIVED FROM THE BICYCLE, THIS TWO OR THREE-WHEELED VEHICLE WAS COMMONLY USED BY PROFESSIONALS FOR LOCAL DELIVERIES OF GOODS.

The electric bicycle, since its creation in 1895, has aroused the interest of many French people over the last 10 years. Indeed, the electric bicycle market is booming, and is enjoying very strong growth in France (around 500,000 electrically assisted bikes were sold in France in 2020), a figure that is 29% higher than the previous year but which nevertheless remains lower than sales in our European neighbours, particularly in Germany, where almost 1.9 million electric bicycles were sold in 2020, and in the Netherlands, where the number of electrically assisted bikes per inhabitant is the highest in Europe.

The question arises as to whether the new success story in the family of electrically assisted bikes will not emerge from the electric cargo bike sector, as we are hearing more and more about this means of transport for family travel, as well as for goods deliverers in city centres (the famous last-mile delivery) or for craftsmen (plumbers, electricians) who are no longer able to park their service vehicles in city centres.

According to a report by Active Travel Academy based on GPS data from a London-based bicycle logistics company, electric bicycles can make city centre deliveries up to 60 times faster than a standard-sized van. Thus, one could also consider from these same statistics, that the electric cargo bike in the context of a family outing remains a faster alternative means of transport than the car, and also more environmentally friendly.

Indeed, these utility bikes also allow a drastic reduction of CO2 emissions into the atmosphere. According to the data from the same London study and the journeys made to verify its veracity, all the journeys counted that operate within a 15 kilometre radius of central London generated only 372Kg of CO2e (7g for production and maintenance, 9g related to the production of electricity and 6g CO2e/k of GHG emissions induced by the cyclist’s “fuel”, i.e. a total of 22 CO2e) compared to 4.2 tonnes of CO2 if these deliveries had been made with fuel-powered vehicles.

Since its introduction on the market, two types of cargo bike can be distinguished:

In the Basque Country (France), the Chenut brothers have understood the craze around electric bikes and the potential of electric cargo bikes, which is why they created the VUF Bikes : “VUF” for Vélo Utilitaire Français (french utility bike). After more than two years of development, they have been marketing an electric utility bike concept since January 2019. Completely innovative in the sector, their bike has a range of between 40 and 60km while carrying up to 200kg of cargo and reaching a speed of 25km/h without human assistance. This makes city centre deliveries faster, easier and more environmentally friendly.

In the same vein, there are other French brands in the electric cargo bike market, such as Douze Cycles, which designs and manufactures two-wheeled cargo bikes with an elegant design, and Kleuster, which markets its Freegônes models, which are three-wheeled vehicles intended for urban deliveries and food events, for example.Or the company TRIPS, which designs and assembles electric three-wheelers for professional use, such as meal delivery, taxi services or mobile kitchens on wheels.

In the current market for electric bike engines, few manufacturers are able to provide this type of engine. According to comparisons of the various engines on the market, the engine developed by Valeo, which will be on the market from April 2022, is by far the most efficient and powerful for this type of vehicle.

It is the world’s first motorization solution for electrically assisted bikes to integrate a 48V electric motor and a seven-speed adaptive automatic gearbox in the crankset. The motor allows the rider’s effort to be multiplied by eight, compared to other motors on the market which multiply the rider’s effort by five at best. The electric assistance of the Valeo motor allows the rider to climb a hill with a load of 150 kg without effort in both forward and reverse!

It also has a ‘pedestrian’ assistance mode when pushing the bike (particularly useful when carrying a load), and a boost function that makes it easier to overtake or go up a hill. In addition to the functions already mentioned, the Valeo motor has an anti-theft system that makes it impossible to use the bike if a third party tries to take it away.

The Valeo smart e-bike system has been designed to remove as many components as possible from the bike, especially vulnerable parts. For example, electric bikes equipped with the Valeo solution will no longer have derailleurs, sprockets, handlebar shifters, associated wiring or the traditional chain, which is now replaced by a simple belt.

For such a powerful motorization, a high quality battery was needed to ensure the bike’s energy needs and autonomy, in all weathers and in all situations. Valeo therefore chose Neogy®, a company in the Groupe Startec Energy® , a highly technical industrial design office that has been developing li-ion batteries, BMS and graphic cards for 20 years. Neogy®’s strategy is to design and mass produce batteries in France for soft mobility.

In 2022, Neogy® will manufacture four different batteries for Valeo’s smart e-bike system for different uses (city, off-road, all-terrain, transport of people and goods), and one of these batteries, which is among the most energetic on the market (around 1,300 Wh on board), will equip cargo bikes.